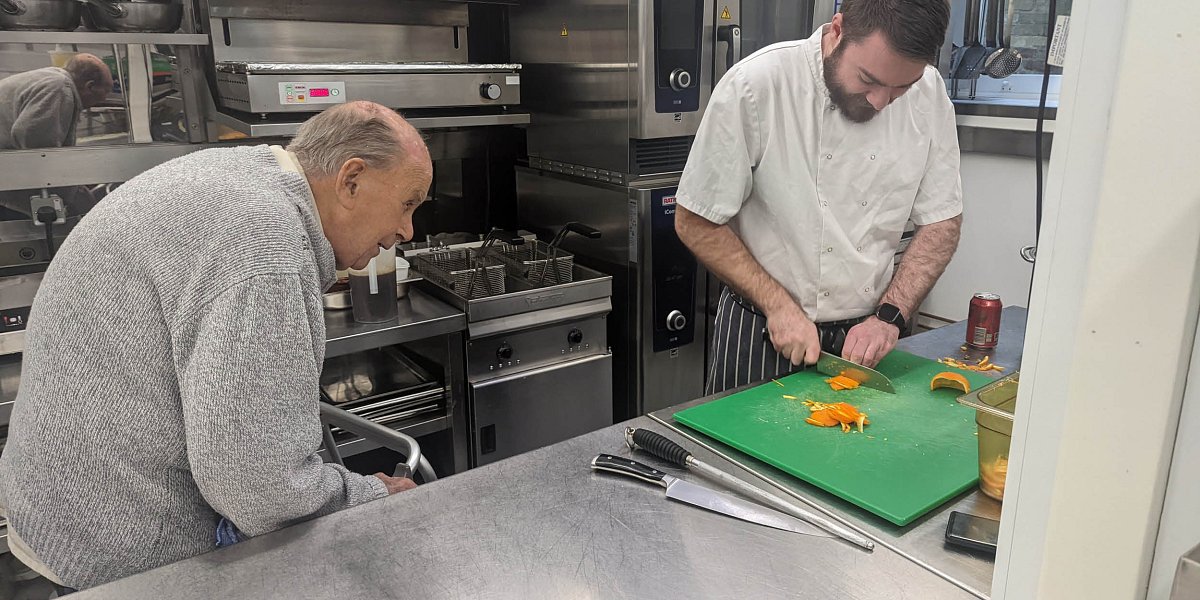 Resident returns to kitchen to reflect on head chef days

A resident at an Island Healthcare home on the Isle of Wight revisited a clubhouse where he was once head chef.

A care resident and former apprentice turned head chef returned to his former workplace to take a trip down memory lane.

Ernest ‘Bill’ Hill, who is a resident at one of Island Healthcare's homes on the Isle of Wight, took a trip to visit the clubhouse of the Royal Yacht Squadron in Cowes, where he worked for 47 years, rising to head chef, having initially started as an apprentice aged 16 in 1944.

With National Apprenticeship Week taking place from 7 to 13 February, the team at Island Healthcare have been taking some residents out to their former workplaces.

The Royal Yacht Squadron (RYS) is a historic yacht club that’s been at the forefront of yachting as a sport since 1826, the year of its first regatta. Bill was a chef in the clubhouse, which is housed in a former castle and forms the social hub for the RYS.

He was greeted by the current head chef, Paul Wooler, who, following a spot of tea and cake in the Lady’s Dining room, showed him around, taking him down to the kitchens and talking him through the changes since he’d left.

At that time, there were two chefs and a part-time kitchen porter, with two more joining during the peak time of Cowes Week, one of the longest-running regattas in the world. Now, though, there are four full-time chefs during the winter months, which rises to 22 kitchen staff during the height of summer.

During the tour, Bill was taken aback by how high-tech the kitchen had become and didn’t recognise any of the latest equipment.

But the visit certainly brought back memories, and he recalled some of the high-profile guests he’d interacted with over the years.

"Prince Phillip used to come down to the kitchen – he always came on a Thursday during Cowes week," he said. "Lord Mountbatten always bought his friend David with him and always had a police officer on his motorbike outside. The police officer once stopped me and charged me £30 for speeding – so I said to him 'don’t you expect any more breakfast from me'!"

He added: “It was brilliant to go back – but the place has changed so much. It’s great to know that it’s thriving though and that my hard work over the years hasn’t gone to waste.”

Ian Bennett, managing director of Island Healthcare, who accompanied him on the tour, said: “It was wonderful seeing Bill back in his old stomping ground. Although much of the kitchen equipment had changed, he still knew his way around and it was great to see it sparking so many happy memories. Having put so many years of hard work into the place, he was delighted to see that it’s gone from strength to strength.”

He added: "Apprenticeships are a fantastic way of learning your trade, as they see you working under the supervision of experts, whilst enjoying hands on experience and learning theory alongside it too. Bill is an excellent example of how a good apprenticeship can set you up for life, and we’re hoping our own programme will serve to do the same, as we welcome people onto an eormously rewarding career path.”